Girls of Paper and Fire by Natasha Ngan

Characters
I’m gonna be real and say Lei was annoying half the time and then half the time she would say something profound and deep. And then she’d go back to being annoying in the next chapter. It’s like she’s having me experience a sinusoidal function of annoyance and it was not a rollar coaster I enjoyed.

I would have preferred Wren’s POV to Lei’s, but I guess for the uninitiated her ignorance is used as a device to get other characters to explain stuff about the world to her and the audience. The sense of urgency over Lei and the other Paper Girls’ situation started very tame and I had thought it was slow to escalate. Later on I got the sense Natasha wanted to show us that Lei learned how bad the situation with the audience over time, which is fine, I suppose. However, having just finished Damsel by Elana K. Arnold, I had expected a more deliberate sort of narrative that acknowledged how rapey the demon king was from the start. Given that there were more girls than Lei in the Paper quarters, I understand perhaps Natasha Ngan wanted to show how different girls reacted to the same situation to say there is no One Way to experience these traumatic events.

But yeah not a big fan of Lei’s inner monologue. Kind of bland, annoying and I couldn’t exactly pinpoint a consistent reason why her personality or lackthereof was the way it was. She was just not as distinct as she could have been. She reminded me of the last youtiao leftover and the problem is there’s no soymilk to dunk her in to make things interesting: 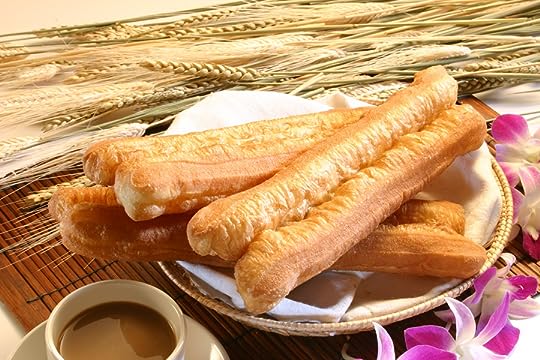 Side note: Definitely give Damsel a try because it pairs off with the message of Girls of Paper and Fire so well. Of course, both books cover sexual assault as a topic so maybe read them consecutively if you’re sensitive to that sort of content. My suggested reading order is Girls and then Damsel afterwards – they’re both in the vein of Fiery Women Escape Nasty Monarch.

Wren was bae ❤. She was like this broody mysterious tall dark and handshum love interest with a tragic past and No Mom Energy™ we’re all so used to in YA romances but a girl. I love that Natasha’s giving me the broody girl rep. Wren’s backstory was what I expected tbh, I just wish we didn’t have to wait so long to get to know Wren OR skim over a lot of the details of the secret romance between her and Lei. Half the time, I loved how Lei would talk about Wren as being her source of strength, her wings, her healing light, etc. The other half, I would be cursing the writing for skipping over the juicy development of their relationship (I’m not talking about steamy scenes hush) like the romansu and stuff. So in other words, I wanted more development to Wren and Lei’s initial interactions and romansu. More of a good thing can’t hurt, right?

Kenzo and Zelle were my favorite characters by far. They made a bigger impression on me than Wren an Lei even tho our Paper gals get so much more page time dedicated to them. Their inclusion made it feel like there was a story outside of Wren and Lei, and since they’re older characters, they also felt grounded in the world.

Sassy owl man Merrin makes me excited for the next book AND we’ll be outside the palace ffs. Finally. Can we make Team Beaky t-shirts but for Merrin not Madame Himura.

I’m gonna skip over the other paper girls because there’s not much to say but the Mariko + rotten scene was probably the best-written scene in the entire book, with the Aoki and Lei confrontations being the 2nd best. I was GRIPPING my pages from the drama and societal commentary y’all.

World
Note: I’m not Malaysian Chinese like the author, but I’m Chinese, so I can speak a bit on that. I admit I might miss some stuff wrt the worldbuilding either way soooo.

I have a love hate relationship with how the writing handles the exploration of the world. I see splattering of interesting ideas, like the secret fallen but actually not fallen Xia Clan and the roots of insurrection within the kingdom was all cool. I personally feel like this book was more rooted in imperial China than anything else, but of course we are in the imperial palace so inspiration from SE or South Asia won’t be as prominent outside of clothing and food references there but would be if we were in the regions more heavily inspired by them in south Ikhara.

Since the reader is stuck in one place, it’s hard to catch glimpses of the world outside the palace, so the buildup of the political drama was mostly in the background a la the Selection series. If you’re looking for goregous, extensive world building, it isn’t here. In this installment at least.

As for multicultural background angle, because I know the author mentioned that when she was talking about her writing process – it’s not how I expected it to come through in the book, but I admit I was projecting my own experiences into my expectations of how it’d be handled. I expected a character to come from two diff cultures and have the book focus on exploring that angle of be character. Wren sort of fits into this role as she is the last Xia warrior and also adopted by the Hannos, but we don’t know how distinct the Xia clan is from all the other paper castes plus we didn’t have a well-defined line between what the paper caste culture was like vs. the steel and moon castes.

The biggest issue I have as there was no distinct baseline for what is “normal” in terms of the culture (I know it’s diverse so there’s no absolute norm, but a baseline would help here), so it was difficult to pick out what was outside the norm. This makes a lot of the worldbuilding seem cosmetic, even though I can tell where Natasha is pulling her inspiration from.

There are definitely different regional cultures of the kingdom highlighted throughout. Examples being the different clans and caste dynamics and regional cultures making their way into the imperial palace and assimilating into mainstream culture. The Paper Girls are from different backgrounds too, though most of them are from well-to-do families. Lei talks about being homesick and how different court is vs. her isolated hometown. A plethora of different cultures exist within Ikhara. Though we never have a pinpoint focus on what the culture is like in Ikhara specifically. It’s like instead of going in with a fine brush to paint the details, we just got splatters of paint in our general direction and called it a day.

I do appreciate a bunch of lunar calendar holidays making it into the book. The court observed something akin to Qingming festival, where they gotta revere their ancestors and burn hell money. The Moon Ball is a celebration of the new year and it was lit and everyone wore red – it’s prolly a direct Lunar New Year comparison. When there’s a death, people wear white which are mourning colors. 8 is the bigass lucky number in this world. All good references. There’s also koyo festival, which I’m not sure what it was supposed to tie into exactly, but it was like a autumn leaf viewing type event.

Overall, there are a lot of good references to Asian cultures in this book. It’s like a love letter to the food, the clothing, etc. However, if we’re looking at Girls of Paper and Fire as a world in itself, the worldbuilding foundation needs work, but there’s enough material to build upon that. One of the biggest weaknesses here is that we are confined to the imperial palace and don’t have ample time or room dedicated to exploring Ikhara itself as opposed to the references to real world Asian cultures.

Plot
It gets rolling near the end, but man it was slow for 2/3 of the book. I wish the Wren backstory were introduced earlier so there was more intrigue to work with instead of Wren going “I love you also soni have to keep secrets to protect you” all the time until the secret is revealed! It’s almost like the reveals were dragged out so there would be material saved for the next book.

The start of the book (and I’m choking just thinking about it) reminded me of Bone Witch because these girls gotta go through etiquette and other courtly lessons WHICH FOR THE MOST PART ARE GLOSSED OVER AND LEFT TO THE IMAGINATION. Nothing pisses me off than a teaser of what the worldbuilding has to offer only to be RIPPED FROM IT by the famous YA technique of glossing over the months with sweeping seasonal changes but not actually describing what happened in detail.

I really didn’t wanna relate this to Memoirs of a Geisha, but Bone Witch is Memoirs-adjacent and it put a bad taste in my mouth because geisha aren’t prostitutes concubines aren’t prostitiutes but westerners can’t tell the mcfreaking difference because Asian women and sex or smth. AARGGJFH This is all to say I got offended (in a petty way) when they blurbed this as Memoirs meets the Selection, but after reading it I see what they meant but it still rubs me the wrong way because of all the negative connotations Memoirs holds in my mind.

TL;DR
Overall, I’d say GoPaF is a decent read, but I got the feeling some parts of the book were stalling for time and the exciting business is meant for book 2. The fact that there’s an aimless feeling to being confined in the palace shows that there’s more to come when the girls are outside of the imperial city walls. The worldbuilding was like a love-letter to Asian cultures, but has room for growth if it wants to stand on its own as Ikhara and not a cluster of references to IRL cultures. Personally, I think the writing could have been better when communicating the themes the author intended, but YMMV. Wren is almost like a standard YA brooding love interest (but f/f), but I still love her. The romance between Lei and Wren can be hit or miss depending on the scene (just like Lei herself), and the story needed to make room for more interactions between them instead of glossing over them and telling us they happened off-page.

(Im)perfect View all posts by arisutocrat